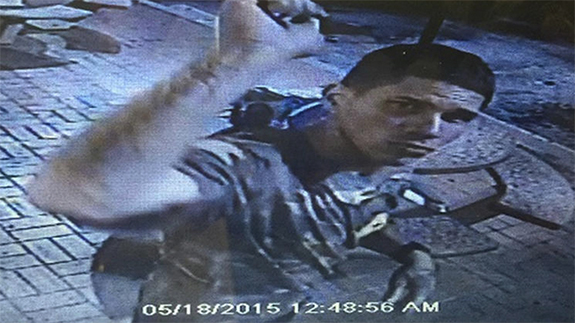 Nieves’s first reported break-in took place at Dollar and Up on May 15th. Seven more area businesses were then victimized over the course of the next couple of weeks. In each case, the culprit broke in and went straight for the cash register, forcing it open and making off with the money.

The criminal’s undoing was the commercial video surveillance system at Twistee Treat, an ice cream stand he burglarized early in his crime spree. Recordings captured during that break-in provided clear images of the crook’s face.

After sharing those images through the media and asking for the public’s help, deputies soon identified Nieves and made the arrest.

While the arrest should help put some area business owners’ minds at ease, the summer is a busy time for criminal activity. Just last week, a burglar broke into 17 businesses in Gainesville in one night. Thankfully, the culprit in that case was also captured on video, which police are using to investigate the case.

Commercial surveillance systems provide valuable evidence for catching and convicting burglars. Police often rely on these images to identify suspects while prosecutors turn to video evidence to convince juries beyond a shadow of a doubt.

Of all the businesses allegedly victimized by Nieves, only Twistee Treat had a video security system. Crooks generally stay away from businesses with surveillance systems whenever possible, and a lack of cameras often makes businesses an easy target.

Positioning is key to an effective video security system. Multiple cameras should be placed to cover as much of the area as possible, with overlapping coverage so criminals can’t slip in undetected. While having cameras out in the open is important for deterring would-be burglars, be sure they’re out of reach to prevent an ambitious crook from disabling them.

Video surveillance is a critical piece that should be integrated with a complete commercial security system. This is a job for a professional, so let Crime Prevention Security Systems assist you with setting up a state-of-the-art security system. Contact us today to schedule your free consultation.