5 Tips to Safeguard Your Home Against Zombies 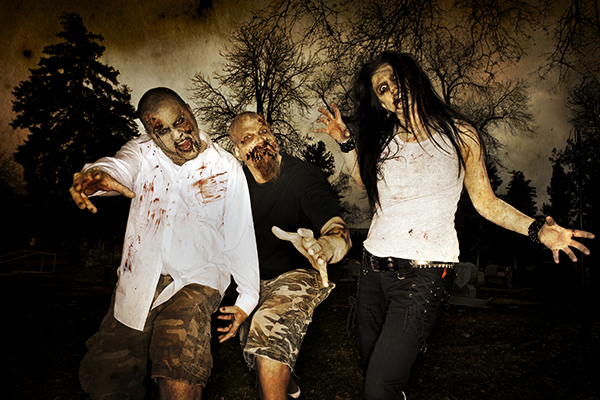 Zombies pose an ever-present threat to our homes, families and brains. According to data reported by Rick Grimes of the North Georgia Zombie Institute, zombies account for 82% of attacks on farms, campsites, seemingly quaint neighborhoods and train terminals.

Follow these simple rules to ensure you and your loved ones make it through the zombocalypse unscathed.

You should alwayskeep your doors and windows locked to keep out unwanted guests. With shambling hordes of the dead walking the streets, it’s wise to take these precautions a step further. Board up your windows and doors, both from the outside and inside. Use screws, not nails, as they stand up better to the clawing and thrashing of brain-eaters. With your doors and windows boarded, you won’t be able to see outside, so useexterior home surveillance cameras to know when the threat has passed.

We all know zombies are attracted to noise, so keep the house as quiet as possible. A zombocalypse is the perfect opportunity to curl up on the couch with a good book or play board games with the kids. Don’t forget about Rover. Barking dogs are zombie magnets, andnot particularly reliable for home defense anyway, so keep him occupied and entertained with the surplus of bones lying around.

3. Coordinate with the Neighbors

The folks across the street will likely face many of the same horrors as you, so stay in close communication.Neighbors can be invaluable resources for securing your home. Walkie-talkies, ham radios and CBs should be fairly reliable communication methods as long as you have a power source. In lieu of those, use a flashlight or mirror to exchange info via Morse code. If Bob down the block is bitten, take the opportunity to break into his garage and reclaim all the tools he borrowed and never returned. Sounds to me like Bob had it coming.

Living in a two-story home gives you a big leg up for defending your family from zombies. Relocate everyone, and all your supplies, upstairs and start systematically dismantling the steps. With no stairs to climb, how could the ghouls possibly get to you, right? Lift yourself out onto the roof and build a rain collection system to supply the family with fresh water. Assuming you have a grappling hook, a launching system and several yards of cable, you can even build an intricate system of zip lines connecting all the homes in the neighborhood. Living in a world crawling with animated corpses shouldn’t preclude the kids from having sleepovers with their friends next door.

5. Have a Backup Plan

Things deteriorate quickly when the dead walk the Earth, so always have a backup plan. When the zombie hordes inevitably breach your perimeter and learn to climb ropes to your second floor stronghold, how will your family evacuate, and to where? Creating and rehearsing ahome defense plan could be the difference between having family dinner and being family dinner. If the gang from The Walking Dead would have planned ahead, they wouldn’t have been spread all over the countryside after the prison collapsed, making the second half of season four way better.

If you encounter a zombie who resembles actor Bill Murray, don’t be too quick to smack him with a fire poker. It may, in fact, be living, breathing Bill Murray just trying to get along.